The Book of Revelation (part 19)

The Book of Revelation (part 19)

The Day of the Lord

For God had allowed us to know the secret of his plan, and it is this: he purposes in his sovereign will that all human history shall be consummated in Christ, that everything that exists in Heaven or earth shall find its perfection and fulfilment in him.

We should be living our now in the light of our future. How are you doing with that?

We are going through the book of Revelation verse by verse on Wednesday nights. Our world is changing. Jesus’ return is soon! I want you to be informed as to what the scriptures have to say about His Second coming and what we should be doing to prepare for that day!

The word Revelation in Greek is – Apocalypsis – an unveiling…God is unveiling the future for us.

Revelation 4 shows God as the creator, owner, and sustainer of all things. The Sovereign. The Almighty. He alone is worthy to bring fair judgments and justice into a fallen world.

Revelation 5 shows God with a scroll in His right hand, the hand of authority. The scroll is God’s title deed to the earth. He is the earth’s rightful owner and is preparing to take it back from His enemy Satan, who took the authority over it from Adam and Eve when they sinned.

In Revelation 6, we looked at the opening of 6 of the 7 seals on the scroll in God’s right hand.

Revelation 7 is a parenthesis between the 6th and 7th seals, showing God’s protection of Jews and the raptured saints in heaven.

The rapture of the church occurs after the 6th seal is opened and the cosmic disturbances happen. The rapture ends this period of severe terror by antiChrist, and prepares the way for the 7th seal to be opened and the Day of the Lord to begin.

Revelation 8 is the beginning of the Day of the Lord, which is when the wrath of God is being poured out.

Understand that there is a clear pattern or sequence of events that are transpiring in Revelation.

The scroll in God’s right hand has been unsealed. The church of the Lord Jesus will be here for the breaking of the first 6 seals on the scroll, as mentioned in Revelation 6.

Look at the chart again: 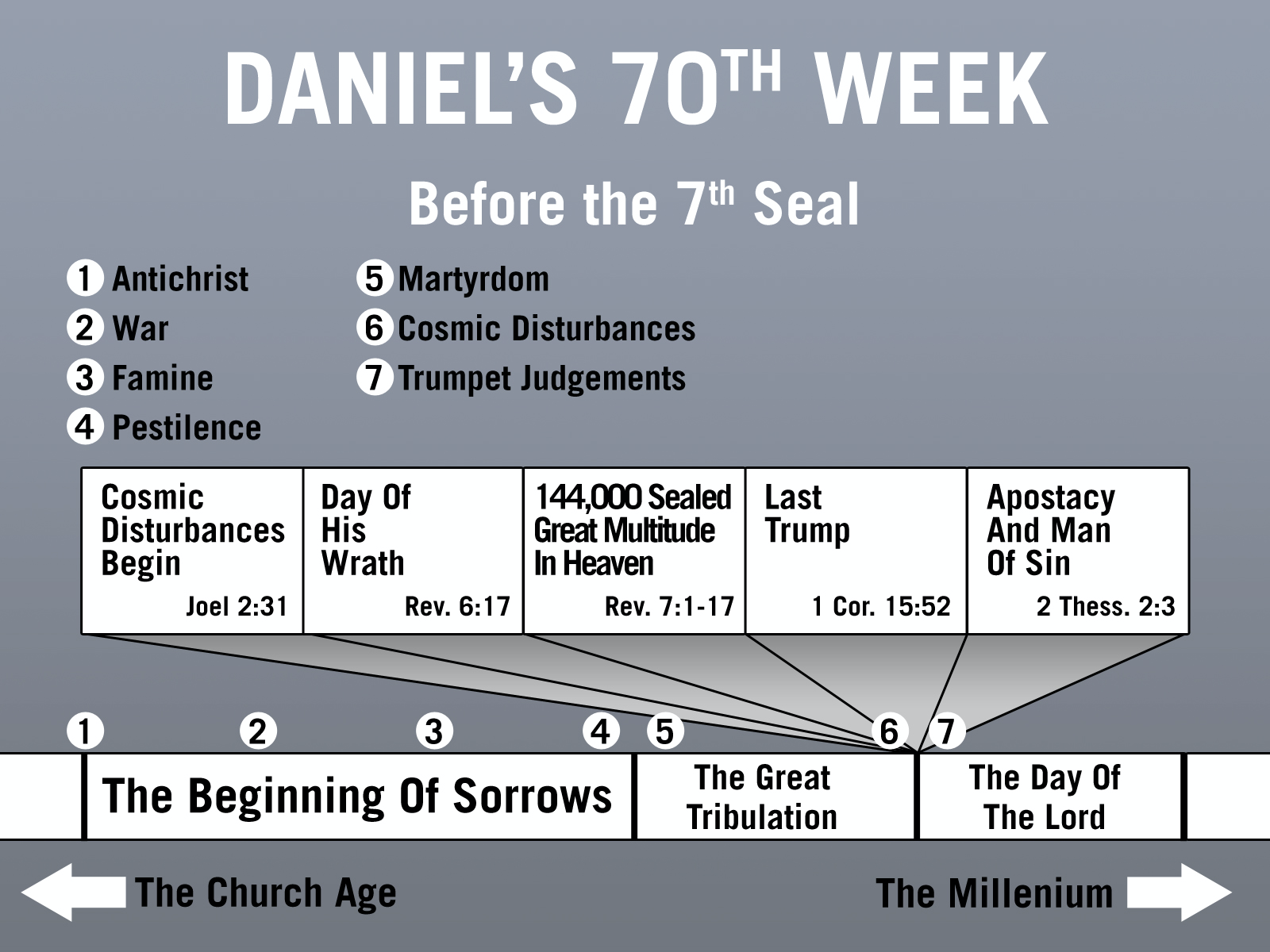 (7) The first angel sounded: And hail and fire followed, mingled with blood, and they were thrown to the earth. And a third of the trees were burned up, and all green grass was burned up.

30% of earth land mass is in Asia; South America and Africa make up 32%; all other continents 38%. No trees or grass would scorch the earth, creating terrible erosion. Look for landslides and flooding and a great breakdown of nature and its processes.

Looks like a huge meteor hits the earth, oceans equivalent to all of the landmass on earth (57 million miles), are polluted, and ⅓ of all aquatic life die. The stench would be incredible over a vast portion of the earth.

(10) Then the third angel sounded: And a great star fell from heaven, burning like a torch, and it fell on a third of the rivers and on the springs of water. (11)The name of the star is Wormwood. A third of the waters became wormwood, and many men died from the water, because it was made bitter.

We can only live three days without water, so lots of people will die from this. If wormwood fell in an area concentrated with human life, then as much as a third of humans could die from lack of water, with parched tongues and dehydration.

(13) And I looked, and I heard an angel flying through the midst of heaven, saying with a loud voice, “Woe, woe, woe to the inhabitants of the earth, because of the remaining blasts of the trumpet of the three angels who are about to sound!”

Now we come to Revelation 9:

Then the fifth angel sounded: And I saw a star fallen from heaven to the earth. To him was given the key to the bottomless pit.

Revelation 12 mentions Satan falling like lightning from heaven. Some believe this is Lucifer..

Others think this was the demonic angel Appolyon mentioned in verse 11.

Yet others think it was the angel mentioned in Revelation 20:1

Then I saw an angel coming down from heaven, having the key to the bottomless pit and a great chain in his hand.

This is probably the same angel.

This locust invasion reminds us of the 8th plague against Egypt by Moses:

It also reminds us of what Joel mentions about locusts:

So I will restore to you the years that the swarming locust has eaten, The crawling locust, the consuming locust, and the chewing locust, My great army which I sent among you.

4 They were commanded not to harm the grass of the earth, or any green thing, or any tree, but only those men who do not have the seal of God on their foreheads. 5 And they were not given authority to kill them, but to torment them for five months. Their torment was like the torment of a scorpion when it strikes a man. 6 In those days men will seek death and will not find it; they will desire to die, and death will flee from them. 7 The shape of the locusts was like horses prepared for battle. On their heads were crowns of something like gold, and their faces were like the faces of men. 8 They had hair like women’s hair, and their teeth were like lions’ teeth. 9 And they had breastplates like breastplates of iron, and the sound of their wings was like the sound of chariots with many horses running into battle. 10 They had tails like scorpions, and there were stings in their tails. Their power was to hurt men five months.

These locusts originate in the bottomless pit, so they are obviously demonic. Their description leads to that belief as well.

They do not harm the 144,000 Jews who were sealed in Revelation 7. They only bring harm to the population of unbelievers who are on earth.

Some think that the 5 months length of time is due to the 5-month lifespan of a locust. Others think the 5 months has to do with the time of year, perhaps from early spring to late summer.

We do not know what keeps these people that are bitten from dying.

And they had as king over them the angel of the bottomless pit, whose name in Hebrew is Abaddon, but in Greek he has the name Apollyon.

Abbadon and Apollyon both mean destruction.

One woe is past. Behold, still two more woes are coming after these things.

Revelation 8:13 mentions 3 woes that will occur when the next 2 angels blow their trumpets. The locusts are the first woe.

And I looked, and I heard an angel flying through the midst of heaven, saying with a loud voice, “Woe, woe, woe to the inhabitants of the earth, because of the remaining blasts of the trumpet of the three angels who are about to sound!”

Then the sixth angel sounded: And I heard a voice from the four horns of the golden altar which is before God,

There was authority here since the voice came from the altar before God’s throne. This seems to indicate that this was the Lamb speaking.

Remember that Jesus is the Lamb that will open the seals on the scroll in Revelation 5, and Jesus is carrying out the contents of the scroll in God’s right hand. The scroll contains The Trumpet and Seals Judgments, which prepare the earth for Jesus to come and reign.

…saying to the sixth angel who had the trumpet, “Release the four angels who are bound at the great river Euphrates.” 15 So the four angels, who had been prepared for the hour and day and month and year, were released to kill a third of mankind. 16 Now the number of the army of the horsemen was two hundred million; I heard the number of them.

The angels here that are released are demonic beings with authority over a demonic army that will attack mankind.

The Euphrates river runs from modern day Turkey to the Persion Gulf. It’s over 1800 miles in length. This river was surrounded by Mesopotamia in Bible days and was the cradle of civilization.

This demonic army from the underworld has been held back until God allowed it to rise up.

Some think this 200 million man army is human, but it is most likely demonic, just like the locusts are most probably demonic.

Before this terrible slaughter, no one could die under the assault of the locusts.

It is large enough to kill ⅓ of mankind.

And thus I saw the horses in the vision: those who sat on them had breastplates of fiery red, hyacinth blue, and sulfur yellow; and the heads of the horses were like the heads of lions; and out of their mouths came fire, smoke, and brimstone. 18 By these three plagues a third of mankind was killed—by the fire and the smoke and the brimstone which came out of their mouths. 19 For their power is in their mouth and in their tails; for their tails are like serpents, having heads; and with them they do harm.

The term plagues is used and reminds us of the plagues issued against the Egyptian gods in Moses’ day.

Remember that John is seeing in the spirit realm, and there are angels and demons in the spirit world that affect physical life on earth.

The people are so engrossed in their sinful idolatry with sex, money, and pleasure that their hearts are hard, and they refuse to repent.

Today, the world is changing, and so many refuse to acknowledge that life will not continue on and on as we have been living. The sinful heart and the normalcy bias that we all have to deal with is strong during this time.

Remind yourself that Christians are not here for this!

Be aware that Christians will not be on earth at this time! This is God’s wrath, and we have been delivered from it!

Reading about these terrible things should cause us to want to put Jesus first place in life right now, and should move us to pray for those we know that are without Christ!

1. Get close to the Lord. Be involved in daily Bible reading, prayer, and in regular attendance in a local church.

2. Pray for your family and friends to come to know Jesus as Lord.

3. Encourage others with the hope of Jesus’ return!

Save PDF to Google Drive